Since the official beginning of Solex production in 1946, there have been many different models produced. New models appeared not only in France, but also in other countries. Surprisingly, many of the new models appearing in other countries were not available in France. For example, a version of the model 5000 was created for sale exclusively in Holland that had 12” wheels instead of the standard 5000 wheels that were 16”.

One model not available in France was the 4600. It was created as an export model, finding its way to new homes in countries such as England, Brazil, Canada, Italy, Denmark, Austria, Greece and the United States. This first version, the V1, was basically a 1973-74 model S 3800 Solex equipped with the handlebars, headlight and motor lift assembly of the model 5000. Also, it was available in not only the standard black color, but also blue, orange and yellow. 
Most V1s use the taillight of the 3800, which was not intended for use as a brake light. However, some V1s have a factory-installed brake light setup which operates off of the rear brake assembly and, therefore, only works when the rear brake is activated. One of these setups uses a resistor block attached to the inside of the left frame rail, along with a switch. Power to the taillight passes through the resistor resulting in a dimmer bulb. When the rear brake is applied, the switch is activated allowing full power to get to the taillight, and the result is a brighter bulb, giving the appearance of a brake light. The taillight is a SEIMA item and the headlight is from CIBIE. Another setup uses a MALY two-lens taillight assembly. Power is sent to the lower lens whenever the headlight is on. This lens also has a clear panel in the bottom to illuminate the license plate. Whenever the rear brake is activated, power is sent to the upper (brake-light) lens through a switch mounted on the inside of the left frame rail. The switch is connected to the rear brake cable with a chain, rod and clamp.

Renault, and then Motobecane, took over VeloSoleX in 1974.

To conform to the USDOT and Canadian regulations of the time, requiring such things as a true brake light, non-inverted brake levers, electric horn, ignition kill switch and sealed beam headlight, a new 4600 version was created for sale in the US and Canada. The 4600 V2 was sold in 1975-76 and has engine serial numbers in the 72xxxxx spectrum. Frame numbers fall into the range of 808xxxx and up. Electrical parts on this version, such as the headlight, taillight and switches, were supplied by CEV, an Italian company. Like the V1, the V2 was available in black, blue, orange, and yellow. The standard pedals are white with orange reflectors, from either UNION or LYOTARD. A new name came with the new version…it was to be known as “The Horse”.

The 4600 V2 was made at the SINFAC factory in Courbevoie, France. For 1977, changes were made to the 4600, the result being the V3. The taillight is a Motobecane item from ULO. The headlight and the switches for the ignition, lights and horn on early V3s are from CEV. The pedals are from UNION, black and tapered in shape. Later 1977 V3s use switches from APRILIA, and GE headlights are used, mounted in Luxor bodies and bezels.
In 1978 and 79, UNION black block pedals with a Motobecane “M”are introduced.

In 1979, the engine serial number is stamped into a metal tag which is riveted to the top, rear of the crankcase.

The V3 was available in: 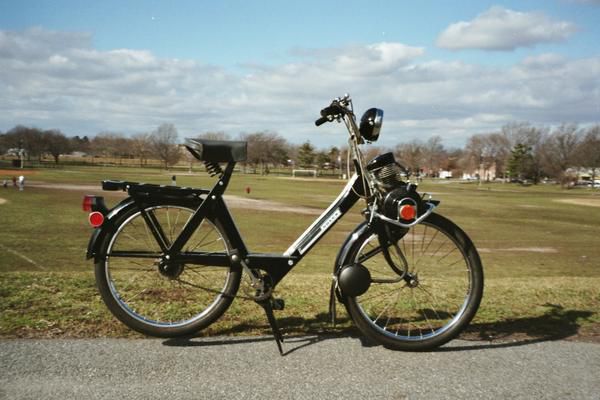 Both the V2 and V3 have a metal ID tag on the frame neck, and an extra coil that powers the brake light. On the V1 and V2, the small front fender is painted white and the center-stand is black, while the V3 has these pieces painted the same color as the frame. A few "cross-over" bikes were manufactured which had both V2 and V3 characteristics, as production was moved from the SINFAC factory in Courbevoie to the SEMI factory in Macon.

The carburetor throttle-lever return-spring on the V2 and V3 is hooked up differently from other Solexes. Instead of the throttle barrel being held totally open by the spring, it is held in an idling position. Twisting the handgrip towards you opens the throttle, and when the grip is released, the throttle springs back to the idling position. The V1, on the other hand, has the same twist-grip and throttle-lever return-spring setup as the S 3800 and 5000.

As mentioned earlier, some 4600 V1s (as well as some S 3300s, 3800s and 5000s) are factory-equipped with a taillight assembly from MALY that includes a conical light on top, a license plate holder, and a typically-styled red taillight lens with a clear panel in the bottom for illuminating the plate. The conical light is the brake light (stop light). To be informed of the latest articles, subscribe:
Back to home page